John Beausang August 29, 2013
1 Comment
First of all, Kill Cliff Recovery Drink is not an “energy drink”.  This is an important distinction, and I’ll get to that later in the post.

Second, I have to admit that when the Mullet asked me to write about Kill CliffTM Recovery Drink, I became a bit anxious. At first, I thought Kill Cliff was a new kid on the block among this outrageously booming market of “energy drinks”. I’m NOT a fan of energy drinks (examples: 5-hour Energy, Monster, Red Bull). Some of these products have loads of sugar or artificial sweeteners and caffeine along with other questionable ingredients such as guarana (a source of super-concentrated caffeine that is much greater than coffee by weight). The safety of energy drinks such as Monster and 5-hour Energy has become quite controversial as a number of deaths have been linked to their consumption (mostly cardiovascular causes).  The jury is still out, but the FDA is more closely investigating the ingredients in these products.

Because I’ve never tried Red Bull or Monster or 5-hour Energy, I took a peek at their websites just to get a feel for who they target and what they stand for, to help me more objectively put Kill Cliff into perspective.

Red Bull seems to be marketing to the extreme sports fans, the partying set, and a relative young audience. They actually make sucrose and glucose (ie, sugar and sugar) sound like healthy ingredients, explaining that they come from the “sugar beet plant” and are “contained in the daily diet”. Red Bull Energy Drink has 27 grams of sugar per 8oz, which they liken to drinking 8.4oz of orange juice or apple juice. In other words, it’s “healthy”. But we all know that juice alone sends blood sugar soaring. And juice would be a better option that this stuff because at least it has some redeeming value. Yes, Red Bull may give you wings, but you’ll be crashing before you know it.

Monster Energy Drink, like Red Bull, appears to be marketing to a younger audience, especially those who’ve had a “hard day’s night” (ie, hangover). And in terms of athletics, they are catering to the extreme sports set, professional wrestling fans, and bull riders. Unfortunately, I couldn’t find a list of ingredients on the website, which is suspicious in itself. But I did find them elsewhere, and each 16oz can of the Monster Energy Drink has 54 grams of sugar along with caffeine and guarana. No thanks, Frankenstein.

Energy for 1/5 of the Day for “Hard-Working People”

I have to give props to the agency that created the niche market for 5-hour Energy. Red Bull and Monster have the teen / early twenty-something’s covered. So 5-hour energy went after the coffee market—the hard-working, family-responsible, second-job, back-to-school set. Why drink 16 oz of coffee or soda when you can get 5 hours of energy in just 2 oz of “5-hour Energy”? This energy drink has been particularly put to the coals due to fatal case reports. And it is a bit disconcerting (yet at least somewhat responsible) that the website has a “how to use” tab which explains:

RECOMMENDED USE: Drink one half (1/2) bottle for moderate energy. Drink one whole bottle for maximum energy. Do not exceed two bottles of 5-hour ENERGY® shots daily, consumed several hours apart. Use or discard any remainder within 72 hours (three days) after opening. Refrigeration not required.

CAUTION: Contains caffeine comparable to a cup of the leading premium coffee. Limit caffeine products to avoid nervousness, sleeplessness, and occasional rapid heartbeat. You may experience a Niacin Flush (hot feeling, skin redness) that lasts a few minutes. This is caused by increased blood flow near the skin.

Reads like a pharmaceutical label, and at least those are regulated by the FDA and have been studied in clinical trials.  I don’t want to consume any type of beverage on a daily basis that comes with cautionary instructions. A little background: Kill Cliff Recovery Drink was developed by former U.S. Navy SEAL, Todd Ehrlich. (Full disclosure—Todd is a buddy of my U.S.-Navy-SEAL-brother-in-law, Drew). The Mullet and I had the pleasure of having lunch with Todd back in April when we all got together for Drew’s wedding. I remember him describing this “recovery drink” he had developed, but I admit at that time, I was only able to listen with one ear because Stella was busy putting strawberries in her hair and hummus in my ice water.

I do recall him describing his desire to create a recovery drink akin to a natural “liquid ibuprofen” which has culminated in Kill Cliff.  As stated on their website, “Kill Cliff Recovery Drink is a lightly carbonated beverage formulated with anti-inflammation supporting ingredients and electrolytes without all the empty caloric content found in energy drinks. Its formula is based on the theory that reducing inflammation is an integral part of recovering from strenuous exercise and physical exertion”.

So, a few weeks later, we received a case of Kill Cliff’s “Tasty” flavor so we could give it a go.

I admit, I was impressed with the ingredients—among them, several substances that have been shown to have anti-inflammatory and energy-boosting properties in clinical studies such as ginger, ginseng (Panax), bromelain (found in pineapple), and milk thistle (a great source of liver support), along with a mix of B vitamins. The caveat to this is that we don’t know the exact quantities of the proprietary vitamin and enzyme blend, so it’s not possible for me to determine if Kill Cliff contains amounts of these ingredients that have been shown to reduce pain and inflammation in clinical studies. Nonetheless, as a pharmacist geek, I do support Kill Cliff’s statement that it contains “anti-inflammation supporting ingredients”.

What I wish I knew…

So, I’ll tell you where I’ve landed on Kill Cliff. I really do like it. I drink one can every day—the Stevia version—“Double Awesomeness”.  I enjoy the taste, love that it’s a bit bubbly, and like that it’s made with natural ingredients (minus the Splenda in the “Tasty” version—again my only beef with this flavor of the product).

And BTW, my dad has arthritis, and so we got a case for him, and so far, he thinks it’s helping!

And you can find this week’s tune here. I really like this Florence + the Machine and Swedish House Mafia collaboration. 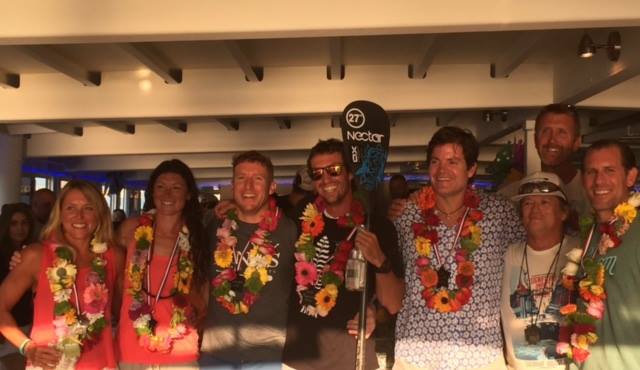 Congratulations to all the paddlers and race organizers who created and participated in the 2015 SEA NYC Paddle. They had calm but hot conditions in contrast…

Please confirm you want to block this member.

You will no longer be able to:

Please note: This action will also remove this member from your connections and send a report to the site admin. Please allow a few minutes for this process to complete.

You have already reported this
Clear Clear All
Change Location
Find awesome listings near you!